The vividly told, gloriously illustrated memoir of an artist born with disabilities who searches for freedom and connection in a society afraid of strange bodies

Golem Girl is luminous; a profound portrait of the artist as a young—and mature—woman; an unflinching social history of disability over the last six decades; and a hymn to life, love, family, and spirit.”—David Mitchell, author of Cloud Atlas

What do we sacrifice in the pursuit of normalcy? And what becomes possible when we embrace monstrosity? Can we envision a world that sees impossible creatures?In 1958, amongst the children born with spina bifida is Riva Lehrer. At the time, most such children are not expected to survive. Her parents and doctors are determined to “fix” her, sending the message over and over again that she is broken. That she will never have a job, a romantic relationship, or an independent life. Enduring countless medical interventions, Riva tries her best to be a good girl and a good patient in the quest to be cured.Everything changes when, as an adult, Riva is invited to join a group of artists, writers, and performers who are building Disability Culture. Their work is daring, edgy, funny, and dark—it rejects tropes that define disabled people as pathetic, frightening, or worthless. They insist that disability is an opportunity for creativity and resistance. Emboldened, Riva asks if she can paint their portraits—inventing an intimate and collaborative process that will transform the way she sees herself, others, and the world. Each portrait story begins to transform the myths she’s been told her whole life about her body, her sexuality, and other measures of normal.Written with the vivid, cinematic prose of a visual artist, and the love and playfulness that defines all of Riva’s work, Golem Girl is an extraordinary story of tenacity and creativity. With the author’s magnificent portraits featured throughout, this memoir invites us to stretch ourselves toward a world where bodies flow between all possible forms of what it is to be human.“Not your typical memoir about ‘what it’s like to be disabled in a non-disabled world’ . . . Lehrer tells her stories about becoming the monster she was always meant to be: glorious, defiant, unbound, and voracious. Read it!”—Alice Wong, founder and director, Disability Visibility Project

nd out, in all their queerness, fragility, and strength, into a stunning new dimension.”—Alison Bechdel, author of Fun Home

“Like Patti Smith and Sally Mann, Lehrer opens a vein and spills wisdom and humor, lyricism, and conviction onto the page. She teaches us with images and words that all bodies are exquisite, just as they are. Lehrer’s life and art is an example of the deepest creativity and resistance.”—Ayelet Waldman, author of A Really Good Day

“Riva Lehrer is a great artist and a great storyteller. This is a brilliant book, full of strangeness, beauty, and wonder.”—Audrey Niffenegger, author of The Time Traveler’s Wife

“Vivid and unforgettable . . . It is the story of how someone who is fundamentally different made not a life that transcends that difference, but a life that lionizes it. This book expands our notion of what constitutes the human experience, and it does so with generosity and openheartedness.”—Andrew Solomon, author of Far From the Tree

“With deft painter’s prose, Riva Lehrer helps us discover what it is to be human when others see us as broken. In Golem Girl, Lehrer gives us the gift, at long last, of our own crip beauty.”—Nicola Griffith, author of Hild

“Lehrer’s story is a revelation of an inner subjective life—full of tragedy, love, and creativity—pushing against the external social stigmas, cultural narratives, and prejudices surrounding disability.”—Stephen Asma, author of On Monsters: An Unnatural History of Our Worst Fears

“A wincing-wise tale, by turns harrowing and hilarious, cut clean through with flecks of grace and beauty.”—Lawrence Weschler, author of Seeing Is Forgetting the Name of the Thing One Sees

The Latin roots of “monster” are monere, meaning “to warn,” and monstrum, an omen, or a supernatural being that indicates the will of a god. “Monster” shares its etymological root with “premonition” and “demonstrate.”

My first monster story was Frankenstein.

Though this first Creature was more James Whale than Mary Shelley. When we were little, my brothers and I would abandon the great outdoors and race inside in time for the Saturday monster movie matinee. Two hours of ecstatic dread. Of delicious nightmares in chiaroscuro black-and-white.

Every few weeks, it would be his turn. I waited for his graceless body, his halting gait and cinder-block shoes. I could recognize the operating room where he was born. I knew he was real, because we were the same—everything that made him a monster made me one, too. We had more in common than scars and shoes. Frankenstein is the story of a disabled child and its parent. It is also the story of a Golem.

Humans have told stories of magically animated creatures for thousands of years. Ancient religions from Babylonia and Sumer, to Mexico, Africa, and China, all assert that gods formed the first human beings out of clay. Enki and Prometheus are but two creators who formed a being and gave it life. These days, we have Victor Frankenstein and his Creature, but long before them, the Jews had Rabbi Judah Loew ben Bezalel and his Golem.

Golem (goylem in Yiddish) is Hebrew for “shapeless mass” and first appears in Psalm 139 of the Hebrew Bible, in which Adam is referred to as a golmi. Adam is brought to life by the breath—the word—of God, transformed from inert matter into vibrant life: the first Golem. The difference is that Adam becomes fully human, while Golems of legend never do.

Iterations of this legend date from as far back as the eleventh century, but the most famous version dates from sixteenth-century Prague. The Golem of Prague tells the story of Rabbi Judah Loew ben Bezalel (an actual historical figure, known as the Maharal) and his creation of a living being made of clay. Golems wend through our stories, from Pygmalion’s statue to the Bride of Frankenstein to Mr. Data and Seven of Nine; from the Cylons to C-3PO, R2-D2, and Chucky the doll. And, of course, to Gollum himself.

While these are not all Golems, exactly, every creature is made of inanimate material that is shaped and awakened by the will of a master (and nearly every story is of a master—not a mater—a male who attempts to attain the generative power of the female body).

Golems are built in order to serve a specific purpose. Adam, it is said, was built for the glory of God. The Golem of Prague was built to save the Jews from a pogrom. Frankenstein’s monster was built for the glory of his maker, and for the glory of science itself. These Golems were not created for their own sake. None given purposes of their own, or futures under their control. Golems are permitted to exist only if they conform to the wishes of their masters. When a Golem determines its own purpose—let’s call it hubris—it is almost always destroyed. The

Golem must stay unconscious of its own existence in order to remain a receptacle of divine will.

Yet every tale tells us: it is in the nature of a Golem to wake up. To search for the path from being an It to an I.

In Golem stories, the monster is often disabled. Speechless and somnambulistic, a marionette acting on dreams and animal instinct. In Yiddish, one meaning of goylem is “lummox”; to quote the scholar Michael Chemers, from God’s perspective, all humans are disabled. The day I was born I was a mass, a body with irregular borders. The shape of my body was pared away according to normal outlines, but this normalcy didn’t last very long. My body insisted on aberrance. I was denied the autonomy that is the birthright of normality. Doctors foretold that I would be a “vegetable,” a thing without volition or self-awareness. Children like me were saved without purpose, at least not any purpose we could call our own.

I am a Golem. My body was built by human hands.

If I once was monere, I’m turning myself into monstrare: one who unveils. 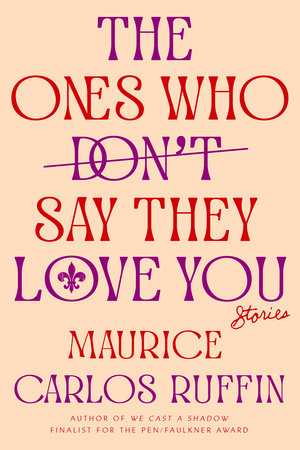 The Ones Who Don’t Say They Love You

A collection of raucous stories that offer a panoramic view of New Orleans from the author of the "stunning and audacious" (NPR) debut novel We Cast a Shadow. Maurice Carlos… END_OF_DOCUMENT_TOKEN_TO_BE_REPLACED 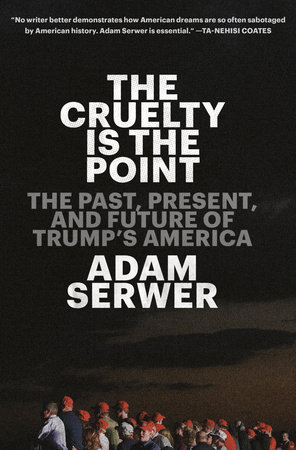 The Cruelty Is the Point

From an award-winning journalist at The Atlantic, these searing essays make a damning case that cruelty is not merely an unfortunate byproduct of the Trump administration but its main objective… END_OF_DOCUMENT_TOKEN_TO_BE_REPLACED